Posted on: 14 janvier 2016 by Philippe Harb in Non classé
No Comments

According to Dr. Philippe Harb, cranio-facial-universe:

Whether in dentofacial orthopedics, prosthodontics and/or esthetic dentistry, surgery, or in posturology, aren’t we all dysfunctional?

Indeed, in our daily practice we rarely if ever receive perfectly harmonious patients, « in a Class I occlusion, symmetrical, without oro-facial disorders nor joint problems and in perfect organic and psychological health. » In orthodontics as in prosthetics and maxillofacial surgery, could our interventions cause Temporomandibular Joint problems, dento-dental articulation disorders, or even general postural disorders? … The answer is unfortunately yes! Why?

Our diagnoses are often incomplete and inaccurate, since the patient is evaluated in a profile view and rarely in a frontal view, or even in an axial view. However, the “cranio-face” is a volume; the deformities are three-dimensional, and they interfere with each other. Actually, our patients are often examined in Maximum intercuspation occlusion, the patient is asked to open, close …, and we classify the occlusion and the facial typology: Class I, Class II … But the maximum intercuspation occlusion hides anomalies of the mandibular position which falsifies the diagnosis and the treatment.

Similarly, our treatments can be iatrogenic, when they lead to mandibular posture abnormalities as in the case of a poorly adapted prosthesis, or parasitic movements in orthodontics (non-banded second molars …) …

So, the main problem to solve is the mandible, the only mobile bone structure of the skull, knowing that its various positions complicate our diagnoses and treatments!

Therefore, the question is not only which mandibulo- maxillo-cranial relationship (called Centric Relation) or occlusion to adopt, but also where, when and how to place the mandible in the masticatory apparatus that consists of FIVE entities.

The Morpho-Functional Mandibular Rehabilitation © ® provides answers supported by clinical cases and movies with 3D animation. It is « another way » to approach the patient as a whole, with the diagnosis and the dental treatment in 3D:

The dental world, such as prosthodontics, orthodontics, periodontics and beyond, such as posturology and rheumatology, have a common discipline, occlusodontics. Professionals in each discipline share the same land, each one of them acting within the scope of his power, with knowledge and tools to optimize the relation between articular and occlusal balance. Clashes between different occlusodontic doctrines have been going on for years now. The first one is gnathologist, focusing on the bi-condylar mandibular joint position in their fossae, or hinge axes. The other one is functionalist, emphasizing the mandibular position through muscular or dental occlusion balance. However, both doctrines agree on the importance of muscular balance that runs the entire system. Several questions remain unanswered: what is the « NORMAL » physiological and functional state, what is the « abnormal » non-physiological and dysfunctional state? More specifically, which mandibulo-cranial relationship, which occlusion, and which cranio- facial morphology do we treat our patients with?

Hence, each one of these doctrines schematically gives priority to genetics (the shape and the hinge axes), or to the acquired (function such as chewing and muscular and/or occlusal balance).

However, the MFMR © ® puts forward the totality of the craniofacial apparatus containing the masticatory system and connected to the general posture. This masticatory system formed by genetics and by the acquired consists of FIVE anatomico-physiological entities (the basal bone morphology, the dento-dental articulation, the disco-ligamentous system, the neuromuscular system and the general posture). These five entities comprise the mandible, the only mobile bone structure with different morphologies and positions, suspended to the skull through muscles.

In addition to the basic data supporting the dual action of genetics and the acquired, numerous clinical observations endorse this idea. Actually, the etiology of functional dysmoprhoses remains preponderant. However all practitioners during their careers had a thumb sucking case without basal or dental dysmorphia; the anomaly of the function, is surely a dysfunction, but it does not necessarily lead to the deformation of the shape. Similarly, the morphology can cause functional disorders: a class II division 1 is not necessarily due to the suction of the lower lip, we can inherit a skeletal Class II and the lower lip is « forced » to get in between the incisors. Thus, depending on the case, correction should be functional and/or morphological.

Reflection on the « normal » leads us to the three-dimensional skeletal and dental harmony (class I, symmetry, normodivergence…) and to the neuromuscular harmony. In other words, it leads us to the harmony of the five entities. The functioning of the masticatory system is the functioning of these five entities together. It is represented by the harmonious act of chewing; on one hand, by the grip of the bolus consisting of a starting position and an end position of the mandibular condyles in their fossae (this starting and end point is the Mandibulocranial Centric Relation which we describe as functional by its correlation with the rectilinear opening-closing movement, and reciprocally), on the other hand, by a functional mastication, a physiological dento-dental relation and reciprocally, all of this followed by the act of swallowing. 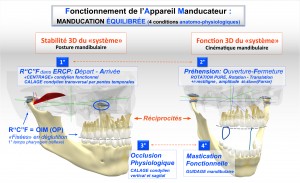 The MFMR is a new conception of global craniofacial and postural rehabilitation, which is morpho-functional (genetics and the acquired) through the preservation or reproduction of the five entities of the masticatory system and the four anatomico-physiological conditions of the act of manducating . Its ultimate purpose is the functional development of the masticatory system in order to make it « reproducible, stable, protected, executed and controlled » by the neuromuscular system via the mandible.

In future articles we will discuss the details of these four conditions and the landmarks to use in diagnostic and therapeutic purposes.